If you’ve been browsing the Brawl Stars subreddit sometime lately, you probably scrolled past a few posts regarding a new Brawl Talk! The rumors are real, and the update may be coming faster than you think, with a new brawler, game-mode, map type, and much more!

Earlier today, an update in the App Store shows that a Brawl Stars update is available, listing the new features that are coming. 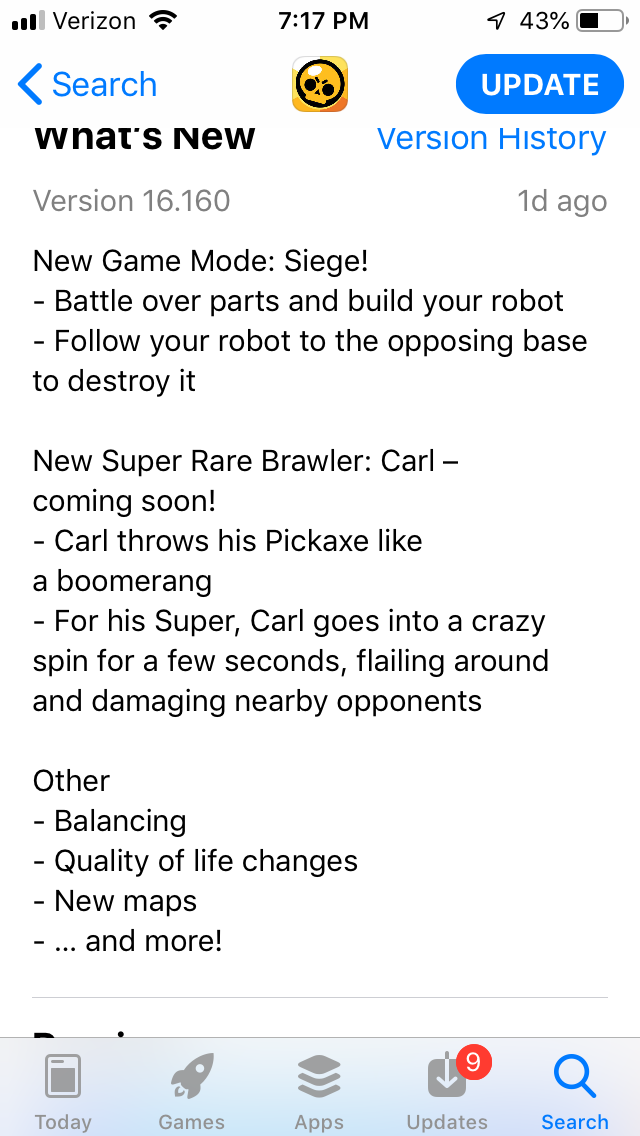 However, this is a bug or mistake, as if you update the game, you will get an error message and the game will not open! This has been fixed and the game is ready to be downloaded. Read the official update post here!

As you can see from the update description, there will be a new game-mode called Siege, and new super rare Brawler Carl, and some other minor changes. Below is an image of Carl:

In addition to the update info in the App Store, user Sector03 on the Official Brawl Stars subreddit claims to have data mined the March 2019 Brawl Stars update. The post lists out many new upcoming features as well as a more in-depth overview of Carl.

Carl throws his Pickaxe like a boomerang. His Super is a crazy cart spin that clobbers anyone around him.

Carl throws his Pickaxe like a boomerang. After he catches the returning Pickaxe, he can throw it again.

Carl goes into a crazy spin for a few seconds, flailing around and damaging nearby opponents.

Carl throws his Pickaxe with more speed, allowing it to travel faster and return faster.

When Carl’s pickaxe hits an obstacle, it bounces off and returns, letting Carl throw it again faster.

Sector03 has leaked the Brawlidays update before and is pretty much spot-on with his leaks, so except much of what’s in this post to be rolling out soon!

What do you guys think of the new leaked update? Please let us know your thoughts! Also follow our Instagram at theofficialbsd! Thanks for reading, and brawl on!

Brawl Talk: One of the most anticipated Brawl...